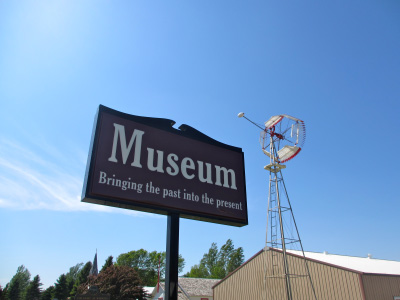 In the early 1980s, Warren Green, superintendent of Waubay School instigated the idea of a Day County museum to showcase northeastern South Dakota’s accomplishments in agriculture. Implement dealers LaVerne “Baldy” Batie and Oscar Akerson of Webster agreed and had items that would illustrate the idea.  Also in agreement were big game hunters, Rich Fiksdal and William Peterson of Day County who had trophies to be displayed for educational purposes.  Northeastern SD historian Herman Chilson; farmers and collectors Alvin Block, Roger Johnson and Kevin Anderson and lawyer Leon VanderLinden joined the group of “founding fathers.”

They developed the philosophy “to preserve the items that best illustrate the life and culture of northeastern South Dakota for future generations to learn from and enjoy.”  The first building was opened in 1986.  The museum has since evolved and displays a vast array of household items, vintage clothing, many private collections, antique tractors, classic cars as well as a wildlife collection.  It honors some of our notable citizens.  It has something for everyone to enjoy:  the serious historian or the hobbyist; the young or the old.

If you are interested in volunteering or donating to the museum please call 605-345-4751 or email us at:
[email protected]

Our museum runs on donations if you would like to support the museum you can now use Venmo.